The Four Courts..1971..16.04.1971..04.16.1971..16th April 1971..The Four Courts,for centuries,has been the centre of Ireland's Judicial system..Work based on the designs of Thomas Cooley, architect of the Royal Exchange (now City Hall), began in 1776. Cooley's building concentrated in the area of the west courtyard and was intended to house only the Public Records Office and King's Inns. When Cooley died in 1784, James Gandon, architect of the Custom House, was appointed to add the courts to the plan. Into his completed design he incorporated Cooley's building, adding two quadrangles and a central block. The quadrangles were given to the record and legal offices, the centre to the four courts of Chancery, Exchequer, Kings Bench and Common Pleas. At the hub is the Round Hall, 64ft in diameter, with inner and outer domes and a surround of Corinthian columns. It was once described as "both the physical and spiritual centre of the building"(www.courts.ie/courts.ie/library3.).Throughout the years the courts have been damaged ,destroyed and rebuilt as a result of rebellion and the Irish civil war..A photograph of the Four Courts showing the dome and the collanaded front of the building. 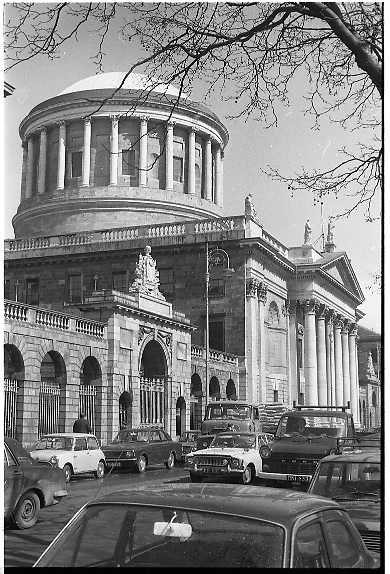