Photo taken at the entrance to Anderson's Well, Martyr's Road, Nenagh of "The Bleeding Horse" Kelly. A very popular character with the rural community in tht '30s and '40s. His name was taken from a pub of the same name in Camden Street, Dublin which was owned by his grandfather. His father has racehorses and is reputed to have gambled away his wealth including the pub. Kelly was a master tailor in the British Army and served during the First World War. As a result of sunstroke he became eccentric. He perfected the art of begging, had an obsession against the clergy, kept his pension book at Martin Gleeson's Bar, now the Railway Bar, spoke with a dinstinct English accent, often resided in Pount Street. 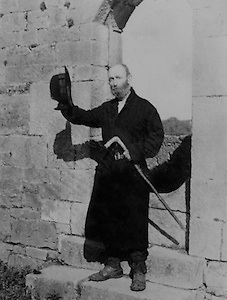