Destruction Of Wolfe Tone Statue..1971..08.02.1971..02.08.1971..8th February 1971..This morning the statue of Wolfe Tone on St Stephens Green was destroyed by explosion. The UDA (Ulster Defence Assoc) were alleged to have carried out the attack..The statue by sculptor Edward Delaney was unveiled by President Eamon DeValera on the 18 Nov 1967. Wolfe Tone ( 1763 -1798) was a leader of the 1798 Rebellion. Captured and sentenced to death by English Forces he died in prison from self inflicted wounds before the execution could be carried out..Picture shows the shattered statue on the ground in front of the famine monument. When the defence forces arrived at the scene a pair of trousers were found hanging from the tree in the foreground. There have been many theories as to how and why they were placed there. 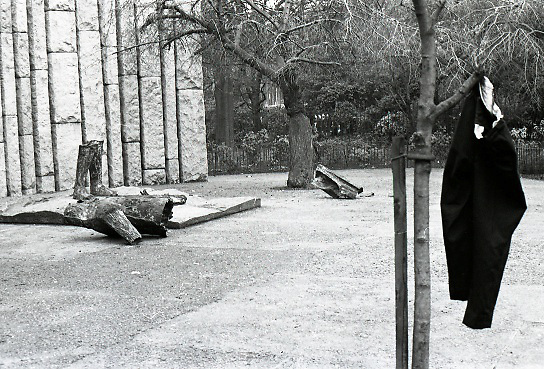