Massive stars typically end their lives in explosive cataclysms, or supernovae, flinging abundant amounts of hot gas and radiation into outer space. Thirty thousand light-years away in the Cepheus constellation, astronomers think they've found a massive star whose death barely made a peep. Remnants of this shy star's supernova would have gone completely unnoticed if the super-sensitive eyes of NASA's Spitzer Space Telescope hadn't accidentally stumbled upon it. These three panels (figure 1) illustrate just how shy this star is. Unlike most supernova remnants, which are detectable at a variety of wavelengths ranging from radio to X-rays, this source only shows up in mid-infrared images taken by Spitzer's multiband imaging photometer. The remnant can be seen as a red-orange blob at the centre of the picture (figure 4).Although the visible-light (figure 2) and near-infrared (figure 3) images capture the exact same region of space, the source is completely invisible in both pictures. Astronomers suspect that the remnant's elusiveness is due to its location, away from our Milky Way galaxy's dusty main disk, which contains most of the galaxy's stars. A supernova is most noticeable when the material expelled during the star's furious death throes violently collides with surrounding dust. Since the shy star sits away from the galaxy's dusty and crowded disk, the hot gas and radiation it flung into space had little surrounding material to crash into. Thus, it is largely invisible at most wavelengths. 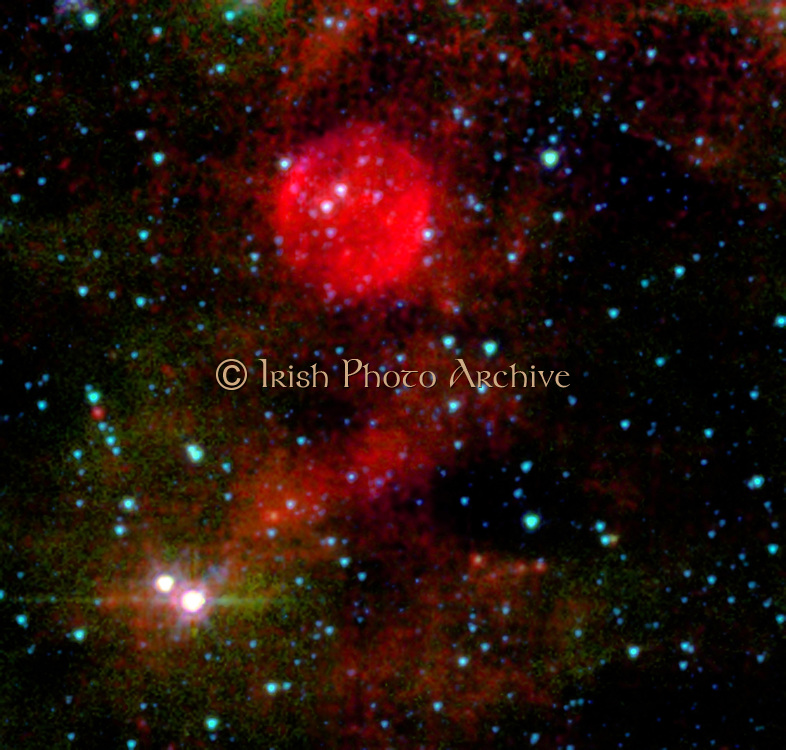