If our galaxy, the Milky Way, were to host its own version of the Olympics, the title for the brightest known star would go to a massive star called Eta Carina. However, a new runner-up—now the second-brightest star in our galaxy—has been discovered in the galaxy's dusty and frenzied interior. This image from NASA's Spitzer Space Telescope shows the new silver medallist, circled in the inset above, in the central region of our Milky Way. Dubbed the 'Peony nebula' star, this blazing ball of gas shines with the equivalent light of 3.2 million suns. The reigning champ, Eta Carina, produces the equivalent of 4.7 million suns worth of light—though astronomers say these estimates are uncertain, and it's possible that the Peony nebula star could be even brighter than Eta Carina. If the Peony star is so bright, why doesn't it stand out more in this view? The answer is dust. This star is located in a very dusty region jam packed with stars. In fact, there could be other super bright stars still hidden deep in the stellar crowd. Spitzer's infrared eyes allowed it to pierce the dust and assess the Peony nebula star's true brightness. Likewise, infrared data from the European Southern Observatory's New Technology Telescope in Chile were integral in calculating the Peony nebula star's luminosity. The Peony nebula, which surrounds the Peony nebular star, is the reddish cloud of dust in and around the white circle. The movie begins by showing a stretch of the dusty and frenzied central region of our Milky Way galaxy. It then zooms in to reveal the 'Peony nebula' star—the new second-brightest star in the Milky Way, discovered in part by NASA's Spitzer Space Telescope. This is a three-color composite showing infrared observations from two Spitzer instruments. Blue represents 3.6-micron light and green shows light of 8 microns, both captured by Spitzer's infrared array camera. Red is 24-micron light detected by Spitzer's multiband imaging photometer. 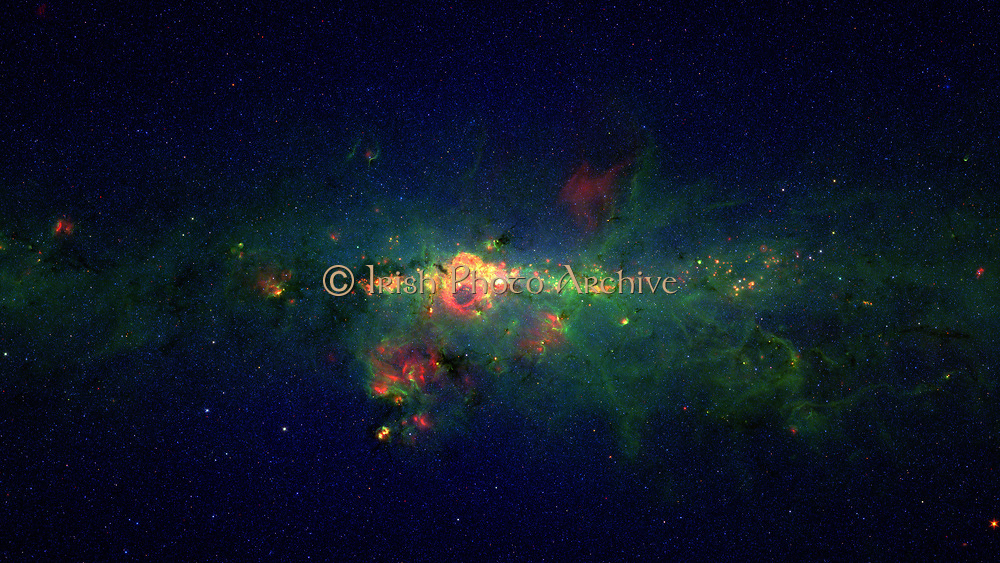