Michael James Hehir, was an Irish hurling, football and horse racing commentator and journalist. Between 1938 and 1985 his enthusiasm and a memorable turn of phrase endeared him to many. He is still regarded as the original 'voice of Gaelic games'.

Michael O'Hehir born Dublin 2 June 1920; Michael O'Hehir married 1948 Molly Owens, Michael O'Hehir had three sons and two daughters. Michael O'Hehir died Dublin 24 November 1996..Michael O'Hehir was the voice of Irish sport for almost half a century..Best known for his vivid commentaries on GAA Gaelic football and hurling matches and horse racing, he was head of sports programmes at Radio Telefis Eireann (RTE) from 1961 to 1972, while he also had a brief spell as manager of Leopardstown Racecourse. Before that, he was racing correspondent for the Irish Independent, a position he held from the late 1940s until the early 1960s. He also produced the Irish Form Book for the Turf Club - a task his son Peter now performs - from 1975 onwards..Michael O'Hehir was Born in Dublin in 1920, Michael O'Hehir began commentating as a schoolboy at the tender age of 18. ..Michael O'Hehir was given a five-minute microphone test during the first half of a GAA league match, and the director of broadcasting at RTE, Dr T.J. Kiernan, was so impressed with him that he allowed him to commentate on the whole of the second half. Two months later, in 1938, Michael O'Hehir made his first broadcast when he covered the All-Ireland football semi- final between Monaghan and Galway..On Sunday afternoons in the 1940s and 1950s people gathered around the radio to listen to him. Michael O'Hehir 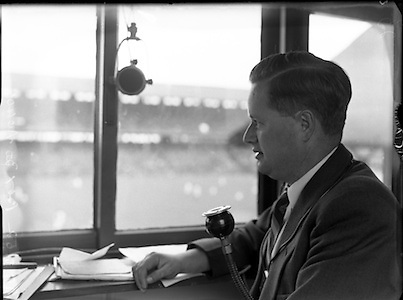