Flooding at the Dodder..1986..26.08.1986..08.26.1986..28th August 1986..As a result of Hurricane Charly (Charlie) heavy overnight rainfall was the cause of severe flooding in the Donnybrook/Ballsbridge areas of Dublin. In a period of just 12 hours it was stated that 8 inches of rain had fallen. The Dodder,long regarded as a "Flashy" river, burst its banks and caused great hardship to families in the 300 or so homes which were flooded. Council workers and the Fire Brigades did their best to try and alleviate some of the problems by removing debris and pumping out some of the homes affected..Note: "Flashy" is a term given to a river which is prone to flooding as a result of heavy or sustained rainfall...Photograph of motorists trying to avoid the worst of the flooding by driving on the 'wrong' side of the road. Motorists were advised to be vigilant as manhole covers had been displaced by the water pressure and were lying unseen underwater. 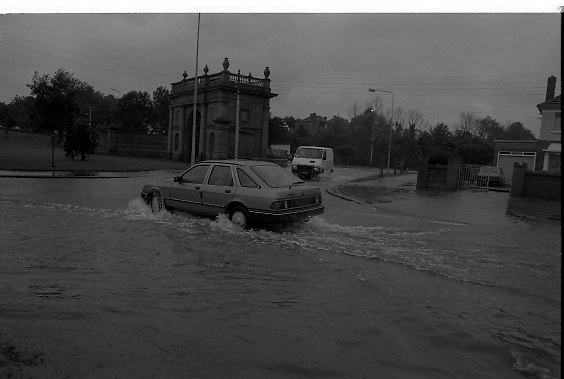