Princess Grace Requiem.1982.23.09.1982..09.23.1982.23rd September 1982.A requiem mass was held at the Pro Cathederal, Marlborough Street, Dublin ,for the repose of the soul of Her Majesty Princess Grace of Monaco..The mass was celebrated by The Papal Nuncio Most Rev.,Dr., Alabrandi. The homily was read by Monsignor John Moloney, P.P.Rathgar, Dublin. Lord Kilannin , Honorary Consol General of Monaco read a lesson at the mass. The Archbishop of Dublin Most Rev., Dr., Ryan and his auxiliary bishops were also taking part. Among the attendees were The Taoiseach, Mr Charles Haughey and his wife Maureen, former Taoisaigh Mr Jack Lynch and Mr Liam Cosgrave..The Diplomatic Corps were also represented..Lord Killanin greets the Archbishop of Dublin Dr Ryan on his arrival. 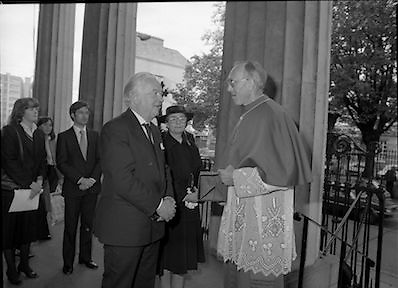