Charles Haughey Receives Seal Of Office. (T3)..1989..12.07.1989..07.12.1989..12th July 1989..After winning the General Election and having been elected Taoiseach by a majority in Dail Eireann, Charles Haughey went to Aras an Uachtarain to accept the seal of office. The seal of office was granted by President Patrick Hillery...Image shows President Patrick Hillery being the first to congratulate An Taoiseach, Charles Haughey,after signing the official paperwork watched by Mr Michael O'hOdhran, Secretary to President Hillery and Mr Dermot Nally, Secretary to the government 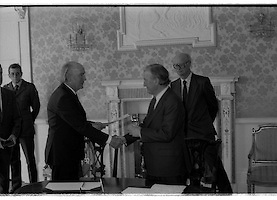