Nissan International Cycle Race..1986..01.10.1986..10.01.1986..1st October 1986..The Nissan Classic began today from Trinity College,Dublin. The offical race starter was The Taoiseach,Dr Garrett FitzGerald TD. He was accompanied by the Minister for Sport,Mr Sean Barrett TD..Sean Kelly was returning to defend his title but his opposition included Greg LeMond, the 1983 world champion and the winner of the Tour de France of the previous July. Roche was out due to his injured leg. Adri van der Poel was back with 1980 Tour de France winner and 1985 world champion Joop Zoetemelk. Teun van Vliet was back too. The winner of the green jersey of the Tour de France that July, Eric Vanderaerden was there as well as Australians Phil Anderson and Alan Peiper as well the Scottish cyclist Robert Millar...Photo shows Mr Gerard O'Toole,Managing Director,Nissan Ireland and minister for Sport,Mr Sean Barrett chatting with a Nissan race official prior to the start of the race. 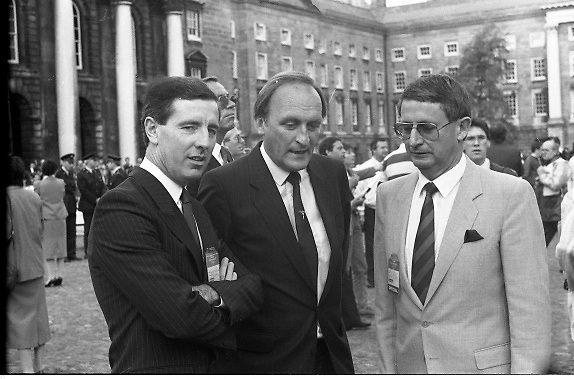