President John F. Kennedy creates history when for the first time a visitor addresses both houses of the Oireachtas, Dáil Éireann, Dublin, Ireland. It was also the first time that news photos were allowed to be taken during a sitting of the houses. Members of the government, led by An Taoiseach Seán Lemass, are seated on the left-hand side of the house and the opposition benches are on the right..28.06.1963. Address by the President of the United States of America, John Fitzgerald Kennedy. 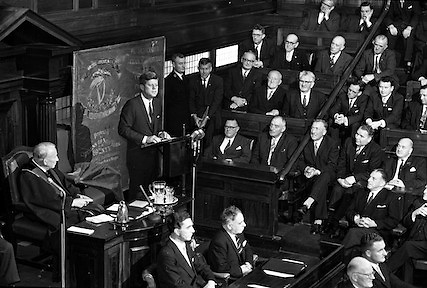