The ball slips between Kerry and Dublin players close to the Kerry goalmouth during the Kerry v Dublin All Ireland Senior Gaelic Football Final, 28th September 1975.

The ball slips between Kerry and Dublin players near the Kerry goalmouth during the All Ireland Senior Gaelic Football Final, Kerry v Dublin in Croke Park on the 28th September 1975. Kerry 2-12 Dublin 0-11.


Gaelic Football.
1. There shall not be less than 15 or more than 21 players a side.
2. There shall be two umpires and a referee. Where the umpires disagree, the referee’s decision shall be final.
3. The ground shall be at least 120 yards long by 80 in breadth and properly marked by boundary lines. Boundary lines to be at least five yards from the fences.
4. Goal-posts shall stand at each end in the centre of the goal-line. They shall be 15 feet apart, with cross-bar eight feet from the ground.
5. The captains of each team shall toss for choice of sides before commencing play and the players shall stand in two ranks opposite each other, until the ball is thrown up, each man holding the hand of one of the other side. 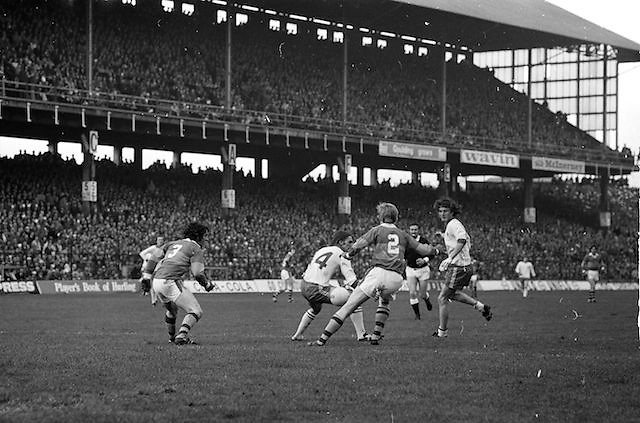