Leo Rowsome making pipes at 9 Belton Park Road.16/06/56..Leo Rowsome (05/04/1903 - 20/09/1970) was the third generation of an unbroken line of uilleann pipers. He was performer, manufacturer and teacher of the uilleann pipes - the complete master of his instrument. He devoted his entire life to the uilleann pipes..Samuel Rowsome, Leo's grandfather sent his sons, John, Thomas and William to a German teacher of music who resided in Ferns, near their home in Co. Wexford to learn the theory of music and how to play various instruments. This knowledge was passed on through William to his son, Leo who made good use of it in his teaching, writing music for his many pupils..Leo was born in Harold's Cross, Dublin in 1903. His father, William realised that his son had the ability to become a talented musician and craftsman. Constantly watching his father making and repairing instruments, Leo learned the art of pipe making and instrument repair. So rapid was his progress at piping that in 1919 at the age of sixteen he was appointed teacher of the uilleann pipes at Dublin's Municipal School of Music (now D.I.T. Conservatory of Music & Drama) for 50 years. He also taught at Dublin's Pipers Club of which he was President..In 1925, Leo's father died at the age of fifty-five. Leo successfully carried on the family business, after completing his own set of pipes in 1926. The instrument remained an object of fascination and veneration for countless audiences at home and abroad..Leo was the first uilleann piper to perform on Irish National Radio in the early 1920s when he played solo and later in duets with Frank O'Higgins (fiddle), Micheal O Duinn (fiddle) and Leo's brother John (fiddle). Leo's "All Ireland Trio" comprised Neilus Cronin, flute, Seamus O'Mahony, fiddle and Leo pipes. He formed his Pipes Quartet in the mid 1930s and broadcast regularly throughout the 1940s/50s. Leo was the first Irish artist to perform on BBC T.V. (1933). He made many recordings for Dec 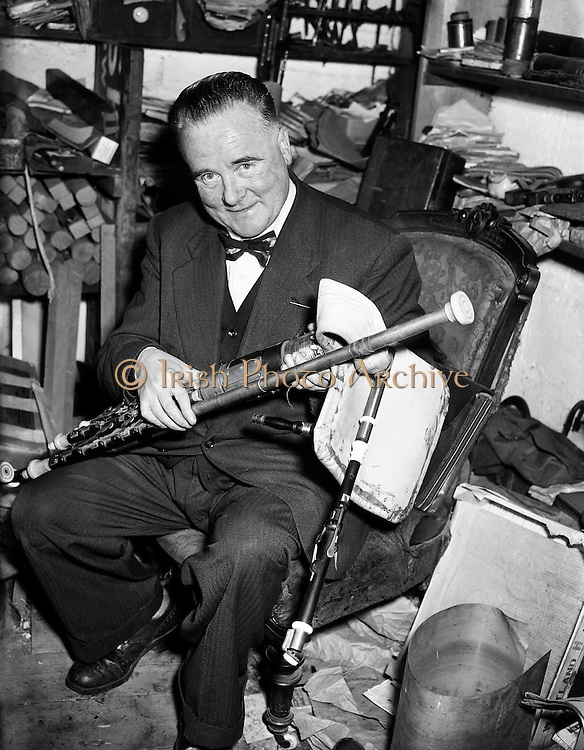