Last Train leaves Harcourt Station.31/12/1958..From the Irish Independent on New Year's Day 1959:..?An hour after the last train had left Harcourt Station at 4.25 p.m. yesterday the 100-year-old terminus bore a derelict look as a sad-faced staff locked up for the last time. The departure of the last train will be long remembered by hundreds of people for among the 500 passengers, there were young children who were having their first and last train journey on that route. Hundreds of people gathered at the station and outside to watch the end of the service. As the train moved out promptly on schedule fog signals exploded and passengers waved to the crowds on the platform..With tears in her eyes, Mrs Maggie McLoughlin, of York St., who had been selling newspapers at the station for 39 years, said good-bye alone and unnoticed in a corner of the station..At Bray hundreds of people were waiting on the station to greet the train as it arrived. Some young men attempted to remove fittings as souvenirs but were prevented by the Gardaí on duty.?. HARCOURT TRAIN STATION,

Filename
A899-6225 Train 3in.jpg
Copyright
SKP AND ASSOCIATES LTD trading as Lensmen & Associates understands that you have read and accepted our terms and conditions. It is important to note that under the Copyright and Related Rights Act, 2000. The copyright of any photograph or image or ''Works
Image Size
3600x3000 / 2.2MB
Harcourt Station Images Dublin Travel Irish Black and White History Irish Photo Archive Transportation 1958 Photography Train Irish Independent Ireland Last Train HARCOURT TRAIN STATION
Contained in galleries
The 1950s Ireland in Pictures 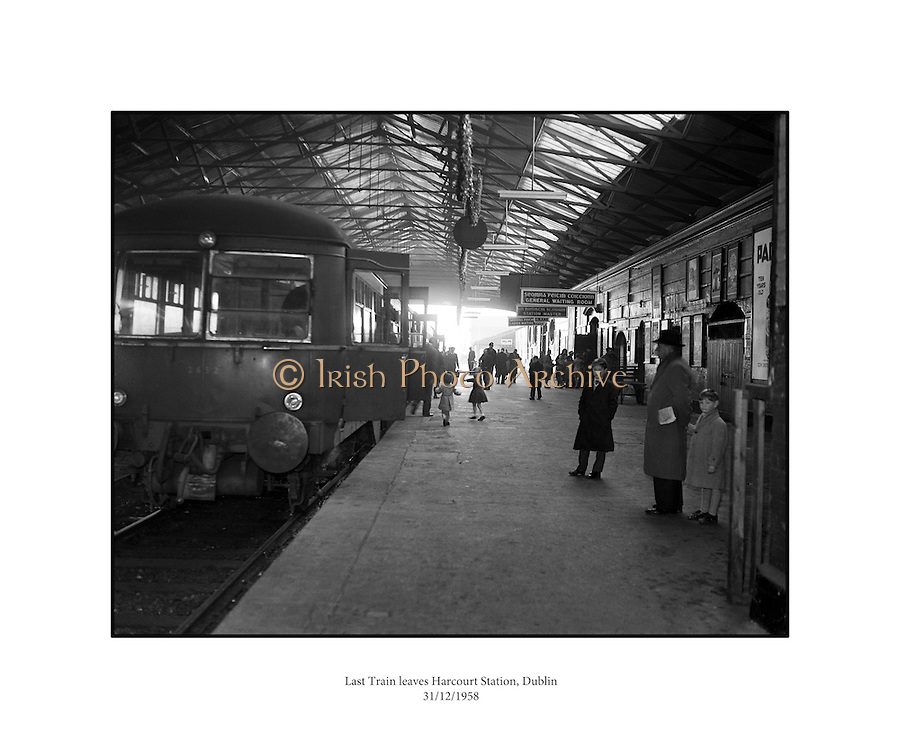