T6-1989-Elaine Spence at the Dept of Foreign Affairs

Brian Keenan's Sister Meets Minister Of Foreign Affairs. (T6)..1989..07.09.1989..09.07.1989..7th September 1989..On the 11th April 1986, writer Brian Keenan was taken hostage in Beirut,he was kidnapped by a group purported to be the Islamic Jihad.As the British and American governments refused to negotiate with the kidnappers Mr Keenan was left in the hands of his abductors. As a holder of both Irish and British passports,his sisters, Elaine Spence and Brenda Gillham,pressed the Irish Government to intervene. At their behest the Irish Government opened talks with the Lebanese authorities to try and locate and free Mr Keenan. Elaine Spence visited the Department of Foreign Affairs to meet with Minister Collins to see what progress,if any, had been made...Image shows Ms Elaine Spence with Minister Collins (L) on her visit to the Dept of Foreign Affairs, Iveagh House, Dublin. 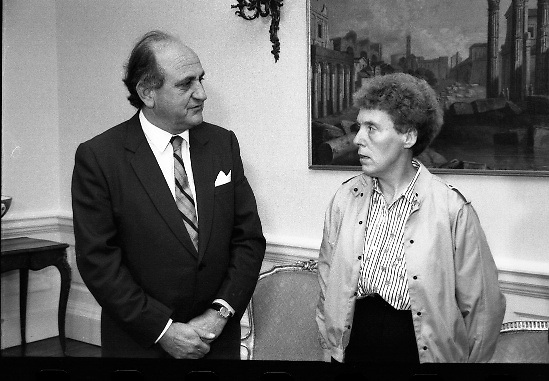