Bible- Translation of Catholic Bible into Gaelic - Presented to Ceann Comhairle at Dail Eireann by Peadar O'Dubhda..Peadar O'Dubhda (29/06/1881-05/05/1971)born in Barronstown, Co. Louth was a novelist, playwright, teacher and musician who spent twelve years of his life translating the Douay Bible into the Irish language...Although he finished his formal education when he left primary school age 12, Peadar O'Dubhda maintained a keen interest in education and even while working as a delivery boy would carry his grammar book with him at all times, eventually becoming fluent in Irish...Holding an interest in music, O'Dubhda joined the local brass band, where he initially learned to play the cornet before going on to perfect the piano, flute and violin. Not content with simply playing other people's works, he went on to compose numerous works and in 1957 when Louth went to the All Ireland final he marked the event with a musical score. ..It is his love of the Irish language that O'Dubhda is most remembered for. It is said that he received his certificate in teaching Irish from Padraig Pearse, a leader in the 1916 Rising. O'Dubhda went on to play a central role in founding the local Gaelic League and also travelled to numerous Gaeltacht area around the country including the Omeath Gaeltacht area closest to his home. ..He taught in St Mary's College Dundalk for over 20 years before moving to Radio Eireann for thirty years where he presented a 'Children’s Hour'. He also wrote numerous plays, stories and manuscripts over the decades...The massive undertaking of translating the Douay Bible took twelve years in which O'Dubhda translated three million words. The work was presented to the Irish nation in 1955. ..Pope Pius XII presented the Papal medal to O'Dubhda in 1950 in recognition of 50 years membership of the St Malachy's Choir. He remained an active supporter of the Irish language up to his death, in 1971, only weeks short of his ninetieth birthday. ..His contribut 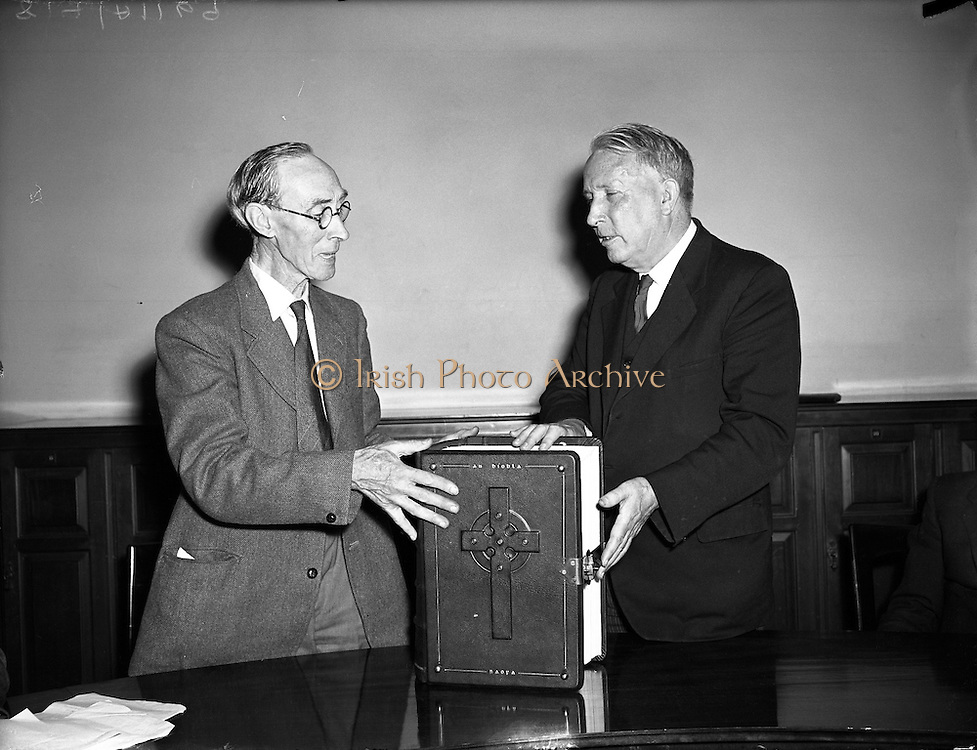