R Delany beating D Ibbotson at Landsdowne Rd..29/07/1957..George Derek Ibbotson MBE (born June 17, 1932 in Huddersfield, West Riding of Yorkshire, England) was an English runner who excelled in athletics in the 1950s. His most famous achievement was setting a new world record in the mile in 1957..Ibbotson was born in Huddersfield and studied at King James's Grammar School in Almondbury. He was of the generation that included other great British milers such as Roger Bannister, Chris Brasher and Christopher Chataway. He was the junior champion in Britain in 1951..After service in the Royal Air Force, Ibbotson returned to competition. In 1956 at Melbourne, he won a bronze medal in the 5,000 meters. After the Games, Ibbotson focused on the mile run, which was probably an error. Ibbotson began the 1957 season running in mile races, as a 5000m or 3 mile runner would often do in the early part of the facing season - to race at a faster pace than he would need in those longer distances. After he had run a particularly fast mile at a Glasgow, an experienced athletics official told the BBC that while it was a very good time, he and many others felt that Ibbotson's greater potential was over 5000m or 3 miles. Unfortunately, somebody then organised one of the many ?miles of the century? and Ibbotson won, probably because Delaney, the 1500m champion at Melbourne the previous year, was boxed in at a crucial point on the final lap. The time was a new world record, taking .8 of a second off John Landy's time of 3.58min set in 1954. The result was that Ibbotson went on running in mile races throughout the season - although also taking part in some longer distance events - and he ran a great number of races and ended the season exhausted. It was not just the number of races but the faster pace at which they were run..Ibbotson never found the same form again...Ronald Michael Delany (06/03/1935), better known as Ron or Ronnie is a former Irish athlete, who specialised in middle distanc 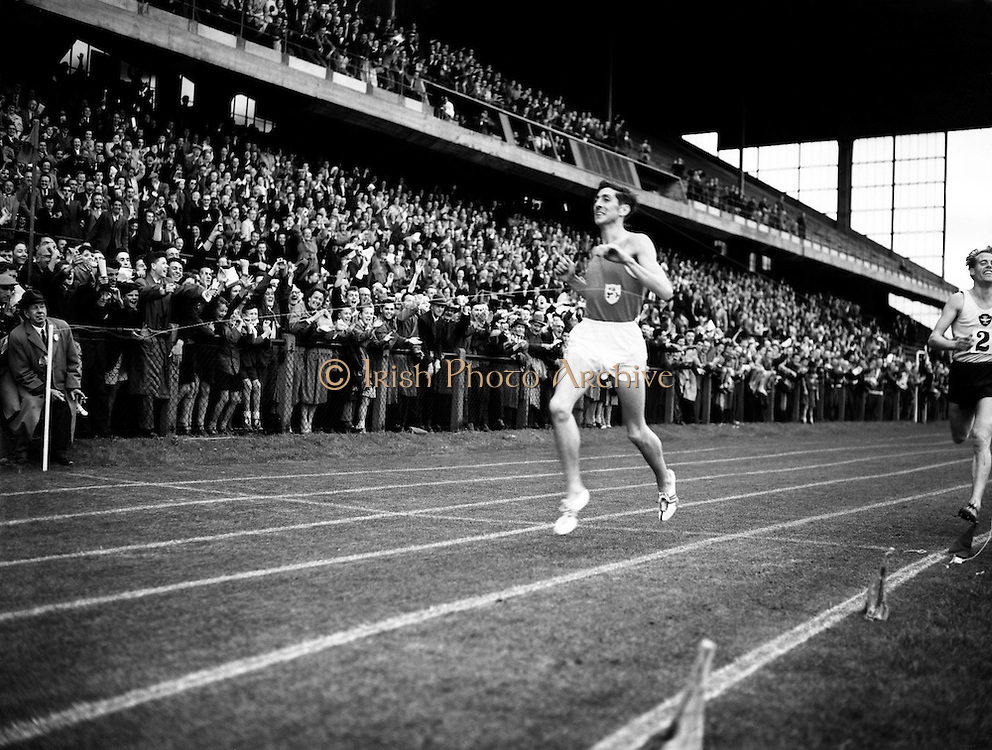